Among all the single-digit numbers, number 8 is probably the most misconceived numbers as most professionals and novices seem to attach the ‘power and money’ image to this number.

Most often, it is seen that the clients usually ask for a change in name and what they actually want is addition of 8s in their charts. They have the wrong notion of the fact that it brings power and money. 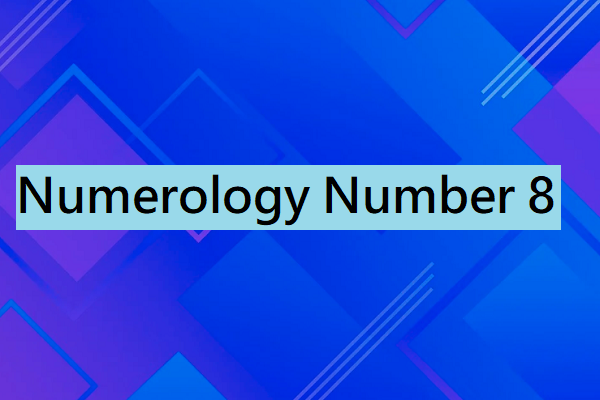 It is however true that this number 8 usually focuses more on business, career, authority and finances. Just as the shape of each number speaks something about the number’s traits, the shape of 8 reflects balance.

This is said to be the Karmic equalizer that can destroy and also create. If 8 comes knocking at your door, you can be assured that you’ll reap just as much as you’ve sown.

The balance between immaterial and material world

The number 8 strikes the right balance between the immaterial and material worlds. This number is as much materialistic as is spiritual. The latter side of this number is realistic, pragmatic and intelligent. It is aware of what differentiates the actual spiritual realizations from the make-believe world.

On the materialistic plane, this is focused on results, mostly in the form of money. However, a number 8 doesn’t care too much about monetary things. It is nothing close to greedy as it sees money as a tool and not an end-result.

People whose charts have strong 8s usually make fortune and also lose them. They never think that bankruptcy is a process of slowing down.

If you want to know few more noteworthy traits of 8s, they’re driven by authority, ambition, organization, efficiency, discipline, management and control. Number 8 is focused, goal-oriented, is able to discriminate, is focused, is practical and is also a true realist.

The closest relative of 8 is a 1 as both of these numbers have great leadership skills, are powerful and are undoubtedly masculine.

They will never be submissive about confrontation. While a 1 lacks the diplomatic skills, 8 has these abilities too, which is the most vital reason behind the 8s to run a business and play authority roles.

The number 8 implies someone who is determined, assertive and responsible. This number brings in financial and business skills though it is often miscalculated with power and money. Number 8 can well be used for enhancing business skills but people ensure balancing an 8 with other numbers that let them retain their discipline.

If numbers were seen as humans, they would share proper qualities with various personalities of Gods like Kronos or Poseidon. In case number 8 was personified, he would definitely be the decision-making powerful child. Due to its shape, it is well-known for its harmony and balance.

He is made up of 2 full circles which symbolise wholeness. On the other hand, number 8 also represents infinity, which is a mathematical sign for a number that is even greater than any possible number.

On the negative side, number 8 is a tad bit aggressive and he should know how to retain his temper if he is eager to keep his authoritative image. A number 8 can become frustrated too soon and also lack tolerance level for certain people, groups or for a society as a whole.

While a number 8 can make a great leader with immensely outspoken skills to attain confidence. In case a number 8 allows his ego to loom larger than his body, he could be too insistent and unmoving for his personality.

Number 8 – What it means in the pages of history?

The number 8 comes across history in several events. There were 8 reindeer that pulled the sleigh of Santa in Rome, Noah’s ark had 8 people and the 8th day post the birth of a child was always considered to be vital. Even the great mathematician, Pythagoras, believed that the number 8 was a holy number.

In the Tarot world, strength and justice cards are all linked with the number 8. The Strength card is the key arcane and it offers the biggest challenge of taming of desires so that strength could be acquired. Few of the healing crystals that work for the number 8 are snowflake obsidian, serpentine and leopard skin jasper.

In the world of astrology, the number 8 is linked with the planet Saturn which is related to practicality, status, resilience and definitely karma. The eighth zodiac sign is Scorpio but this number is especially lucky for people with planets that embody the energy of Capricorn.

People who have number 8 in their lives

Do you constantly find the number 8 appearing in front of you? If yes, it brings a comprehension of diplomatic and business relationships. The personality of 8 always concentrates on reaching goals and they keep setting too many goals in front of them.

Those who have prominent 8s in their charts, they tend to have an interest for business and love to utilize their economic skills. They’re hard-working, dedicated and focused on honing their skills time to time to be able to achieve their goals. Thanks to their people skills that you can trust them.

Traits that the 8s can improve on

Here are some personality traits that the number 8s can improve on.

Therefore, number 8 people should utilize their assertion in reaching goals and creating something good for the future.