No matter whether you believe it or not, it is a fact that apart from the Sun and the Moon, there are several other planets that play a role in defining our natal charts. While Juno is one of the most known and that defines personal relationships like marriage, there is another one that is often forgotten and not spoken much of. 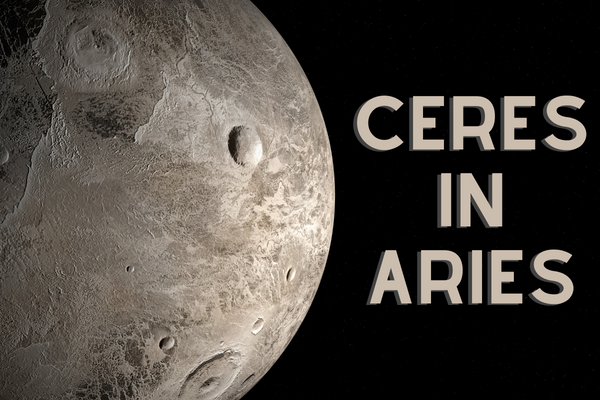 It is Ceres or Demeter, which is the largest of all the most important asteroids that are utilized in the field of astrology. The asteroids are usually used for a proper understanding and comprehension of the personal natal chart.

Do you understand the meaning of Ceres? Well, in the most common-sense meaning, it represents upbringing, care, and childhood, which is similar to the Moon in a way, but not too similar. While the Moon has the responsibility of raising small children and babies, Ceres, the asteroid is more connected with older children and adult care.

In a more symbolic sense, Ceres is actually Mother Earth and when you know the position of Ceres in natal charts, you tend to learn a lot about the kind of relationship you share with your children or parents and also the relation between a child and a mother.

A General Meaning and Significance of Ceres

Probably the most important trait that is carried by Ceres in Aries is that it blesses you with positive mental activity and movement. When we say activity, we mean any kind of activity from which you obtain strength.

For Aries, the most vital thing is to be on the move. Moreover, when Ceres is also placed along with the sign Aries, it suggests as though it doesn’t demand cuddles and gentle emotions, but there can be some sort of exhausting activity. This relationship will be highly exciting.

In case there are kids that have Ceres located in the zodiac sign Aries, these are kids who will ask for very few hugs or emotions or other types of joint activities. There are active kids who are devoting their attention and care to others through encouragement and they are of the opinion that willingness is one of the most vital virtues in life.

For some people, this position of Ceres could be an unfavorable position as this might bring forth a lot of negativities during early childhood. Such children could have been victims of ambitious parents who either demanded too much love or may have suffocated with too much attention and love.

Origin of Ceres in Astrology

As already mentioned above, Ceres is an asteroid and it was the largest to be found orbiting between Jupiter and Mars. Although astrologers considered it as an asteroid, it had been given the stature of a dwarf planet in the field of astronomy. Though people overlook the meaning of Ceres, it is an element that is perfectly placed in a natal chart and can speak a lot about self-care, nurture, and well-being. Hence, the position of Ceres in a person’s natal chart can be a sign of their weakness.

This element is the Earth Mother in the astrological arena because of the rules of nourishment, cooking, and food. This is probably the reason why it represents nurture and why astrology views it as the ruler of Virgo.

The position of Ceres shows how you give care and how you receive it. Ceres is a storyteller who points out the childhood aura and how that impacts self-care. This is where you strike the connection between Virgo and Ceres.

On the contrary, the Moon represents self-identity and it concentrates on inner thoughts, feelings, and the way in which one reacts to the people around them.

As we see, the asteroid called Ceres, when it is placed within the Aries Zodiac sign, invites independence that is shown through physical activity, not too much cuddling or some type of emotional gestures.

The Aries doesn’t prefer this type of affection and shouldn’t get there. It is also believed that the people who have a position of Ceres can feel inadequate from one time to another, having a perfect sense of things that aren’t working in their favor and that the potential isn’t as what it should be.

However, on a positive note, such a position gives a personality that is consistent and loves physical activities. These people are extremely protective regarding their families and they also anticipate their loved ones to give them total freedom as they are pleased.

People who have Ceres in Aries give utmost importance to self-determination and they do their best in order to support this characteristic of theirs. The soulmate, in such a case, should respect and love a similar type of activity and should be loving and determined, and never too emotional.

Ceres in Aries – The impact on a woman

We are aware of the fact that Aries is a sign of fighting, enterprising, fiery, someone who doesn’t prefer being too emotional and can at times be extremely strict with her family. A woman who has Ceres in Aries is fiercely independent and she loves her leadership skills. A woman with Ceres in this position will also give stringent orders and commands to her children.

In lieu of these characteristic traits, she is the mother and the wife who is always searching for order, discipline, respect, and work. This mom is all set to teach her children to become independent and make decisions independently, to believe they are fighters for life.

If you take a close look at this, you’ll notice the positive traits of this position where the woman will always support the family, come what may. She will always nurture their independence, eager to create a future leader, a worker, warrior, a brave fighter, who will fight through all odds of life.

This woman will never let her career go neglected and can even request the other family members to step into the family business. A lady who has Ceres in the Aries Zodiac sign will work hard to raise independent children and ensure they can create their presence in the world without anyone’s support and help. In the entire process, there won’t be any emotions as she herself is the main part of this process.

Ceres in Aries – The impact on men

The asteroid Ceres in the zodiac sign of Aries refers to taking on independence, responsibility, and skills of organization. You can also find this man as a typical parent and how all these virtues are important to him as a parent. This man is not only concerned about his children but also of his entire family.

This Ceres man doesn’t prefer passivity, or weakness, and no matter whatever may the case be, this man will never allow giving up or surrendering. Similar to the female counterpart, he is also a fighting parent who can protect his child from every possible danger. He is proud of the way he is and has no regrets about it.

Such a Ceres man will ask his children to be persistent to obtain the best results and the main idea is to raise them singlehandedly as good individuals. A Ceres man can often be termed as a perfect parent and also a demanding one who is always looking forward to getting the most out of his children.

Advice for Ceres in Aries

Whenever such a transition of Ceres into Aries is evident, you get a feeling of needing more independence and a bigger requirement for entrepreneurship. This is certainly the right time to evaluate and analyze your relationship with your parents, particularly with your mom. If you keep blaming others for whatever is happening in your life, this transition will bring concern and worry into the scene.

That which will come up in the first place is a desire to act and what kind of action will it be? Well, Aries doesn’t know how to wait for long and Ceres will push you further to complete things faster. This is the moment that will show you the kind of upbringing you’ve got. It will decide whether or not you were brought up to be more energetic or diligent.

Whenever your child falls into such a state, he may need more love and cuddles from you. Consider what your baby will need and what are the ways in which you can show your love and care for him.

The most vital thing to keep in mind for the Aries is to be on the move. This can be the best time to travel to some unknown destination or be engaged in some kind of movement. Although you might not be in the mood for cuddles, you may still find yourself involved in some kind of engaging activity.